The BERLIN study evaluates the structural reform of Berlin‘s secondary school system. This reform merged the two non-academic tracks (Hauptschule, Realschule) as well as the comprehensive track (Gesamtschule) into one new track (Integrierte Sekundarschule, ISS) while retaining the academic track (Gymnasium). Another feature of the reform is a new organization of the transition procedure from primary to secondary school.

Beginning with the school year 2010/11, the state of Berlin carried out a comprehensive school structural reform. In this context, the formerly existing school types of Hauptschule, Realschule and Gesamtschule were merged into a newly introduced integrated secondary school (ISS). All school leaving certificates, including Abitur (higher education qualification) can be acquired at the ISS. Furthermore, ISS is organized on a compulsory all-day school basis and is strongly oriented towards vocational learning and orientation. Moreover, the repetition of a school year was abolished at the ISS. The main objectives of the structural reform were to increase the percentage of school leavers with a medium or higher level of qualification, to reduce the percentage of school leavers without a degree and the weakening of the relation between students’ family background and their educational outcomes. As an additional feature of the reform, the transition from primary to secondary school was modified. The most important change concerns enrolment procedures at the secondary schools. If demand exceeds a school’s capacities, up to 10 percent of the placements are allocated to students with special family or social backgrounds (“hardship cases”). The school selects 60 percent of the candidates itself, for instance on the basis of grades or tests. The remaining 30 percent of placements are drawn by lot. On the one hand, these new regulations are meant to contribute to a stronger differentiation of school profiles, while on the other hand, the chance allocation by lot is to guarantee a minimum degree of heterogeneity in the student body. 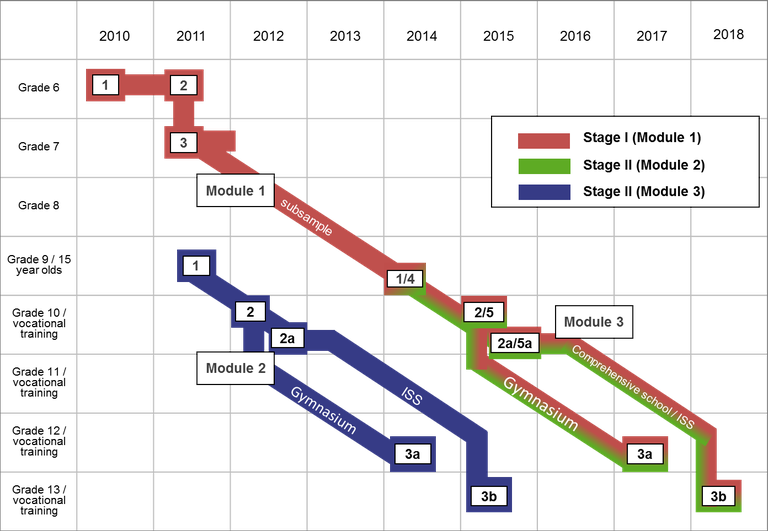 The students assessed at stage I of the BERLIN study (Module 1) belong to the first year of students subjected to the new transition procedure. Roughly 3500 students from 87 randomly selected schools are thus monitored from year 6 until year 10. The assessment also includes primary school teachers as well as principals from primary and secondary schools. Because of their central role in choosing the secondary school for their child, parents are interviewed prior to, during and after the transition of their children to secondary school (see figure 2).
Another change in the transition procedure from primary to secondary school concerns the extension of a probationary period at the Gymnasium from half a school year to a full school year. This means that some students will move from Gymnasium to an ISS after grade 7, and continue their school career there. The BERLIN study assesses the further development of these students by oversampling this group. 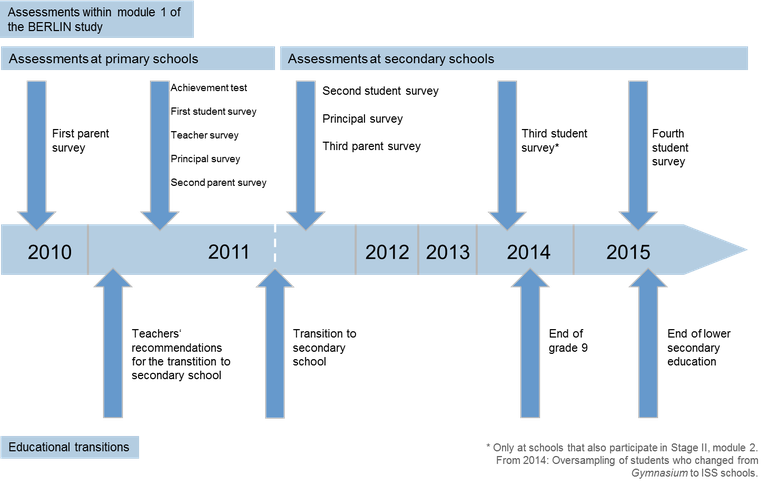 Figure 2: Overview of assessments in stage I of BERLIN study

Some of the central questions considered in the first stage of the BERLIN study are:

Findings from stage I of the BERLIN study can be compared with findings from earlier studies on school transition (e.g. ELEMENT-Study) that were conducted before the school reform.
In June 2013, first findings from the BERLIN study on the new transition procedure to secondary school were presented to the public (see Maaz, Baumert, Neumann, Becker & Dumont, 2013). A summary of central findings can be accessed here (in German).

At stage II of the BERLIN study, educational outcomes of students are assessed for 15-year olds respectively students in grade 9. Furthermore, the ninth grade students are followed in a longitudinal design through upper secondary school levels respectively vocational education. This longitudinal design is implemented for two cohorts: a cohort from the previous school system (cohort 1, module 3) is compared against another cohort of students from the newly structured system (cohort 2, module 2).
Assessment of cohort 1 (module 3) began at the end of school year 2010/11. 130 secondary schools in Berlin were randomly selected, and 4500 students were tested and interviewed. The sample included both ninth grade students and 15 year olds from other grade levels. A further assessment and interview took place at the end of grade 10. About four months after they had completed grade 10, students who had not attended a Gymnasium were contacted by mail and asked about their further vocational education and training career. Another survey takes place in schools in the year of higher education qualification (Abitur; 2014 in year 12 at Gymnasium respectively 2015 in year 13 at ISS). Students who have already left schools at this point are send a questionnaire via mail. Furthermore, secondary school principals will be interviewed.
Assessment of cohort 2 (module 2) is based on identical instruments and the same assessment rhythm as for cohort 1, beginning at the end of school year 2013/14. Assessments will be finished in 2018 (see Figure 3).

Figure 3: Overview of stage II assessments of the BERLIN study

Stage II of the BERLIN study focuses on the comparison between cohort 1 and 2, that is, students within the secondary school system before and after the reform. Among the central research questions are:

The BERLIN study design allows for integration of some students monitored throughout stage I into stage II. They form a subsample of cohort 2 so that for those students, longitudinal measurements from the end of primary school to the end of upper secondary school respectively vocational education will be available.  Furthermore, achievements of students participating in the BERLIN-Study can be compared against findings from other assessments, by implementing achievement tests from PISA studies (mathematics, reading comprehension and science) as well as the IQB-Ländervergleich assessments in which German federal states are compared (English).